We made the journey to Minneapolis for a baby shower honoring Dan and Aren (a.k.a. “Daren”). Cullen seemed perplexed when he met the strange man who looked exactly like grandpa, yet wasn’t… Uncle Grandpa? Mike and Kathy are back from Arizona looking tan and they were very excited to meet the newest LaVigne. Cullen was also doted over by Michelle, Chris, Emily, Claire and Molly (and of course Brigette and Annie). He enjoyed being cuddled by everyone – especially Claire and Molly. Chris also informed us that Dirk’s blog is making him look bad – so please enjoy all of the pix of the girls. It doesn’t look like Emily’s pressure is getting their blog produced any sooner! (Sorry Chris!). Cullen is the littlest LaVigne, but not for long… Brigette is due in May and Aren is due in June. He can’t wait to meet his cousins, but for now he’s content soaking up the limelight.
Posted by Dirk and Lisa at 4/27/2008 09:36:00 PM 1 comment:

Cullen’s Aunt Tracy and Uncle Jason ventured across the Mason Dixon Line to meet their nephew. Although, the weather was not as nice as we would have liked, a great time was had by all. Tracy and Jason arrived on Wednesday night and stayed through Sunday morning, spending the majority of their time hanging with their new nephew. Cullen was back in pre surgery form: attacking his pacifier and bottle during his waking moments, while cooing and grunting as sweet dreams rolled through his head the rest of the day. He is looking forward to their next trip up in mid July.
Posted by Dirk and Lisa at 4/27/2008 09:27:00 PM 1 comment:

The other day I was perusing an issue of Men’s Health, when I read of the importance of hard abs for attracting the ladies. Well, thinking that I want Cullen to be the heartthrob of his upcoming daycare class, I immediately got him on a workout program with the hopes of him forming a six pack to show off on the first day. The intense sessions led to the over-growth of one of his muscles. Unfortunately, it was the muscle that connects his stomach to his intestines: a condition known as Pyloric Stenosis.

All kidding aside, Pyloric Stenosis is a condition which occurs predominately in first born males between the ages of 4-6 weeks. The Pylorus muscle that connects the stomach to the intestines becomes overgrown and seals off the exit point for food to pass through, thus starving the child of much needed nutrients. With the food unable to pass through into the intestinal tract the stomach basically tells it, “if you aren’t going out that way, then you’re going the other way.” The result is projectile vomiting, which is how Lisa and I noticed that something was amiss with young Cullen.

About a week ago, we began to notice that Cullen was spitting up everything he was eating. While we knew that babies spitting up after eating was a pretty normal activity, the force and volume of these spit-ups did not seem normal. On Thursday afternoon, Lisa decided to have him checked out. With Cullen falling in the demographic and possessing the traits of someone who has P.S., our Pediatrician had him undergo an ultrasound. The procedure confirmed that Cullen indeed had P.S.

Unfortunately, the only way to correct this abnormality is through surgery. We were assured by the doctors, most importantly my Uncle Dick (a radiologist, who coincidentally was at my parents house waiting to meet Cullen when we found out the news), that this was an extremely safe procedure and not to be overly concerned about it. While this helped lessen our fears, the last thing you want to hear is that your five-week- old son is going to be put under and operated on. So, with extremely nervous parents by his side, Cullen was admitted to the hospital.

Cullen was operated on early Friday afternoon and, as promised, it was a rousing success. We spent the next day and a half in the hospital while he recovered. We were discharged early Sunday and are now thankfully under our own roof. Cullen is doing great and more importantly is eating, digesting and processing everything normally. There is little doubt of this as we now have an increasing number of dirty diapers and a decreasing number of Dad’s dirty shirts.
Posted by Dirk and Lisa at 4/20/2008 08:35:00 PM 2 comments:

Happy Birthday to Me 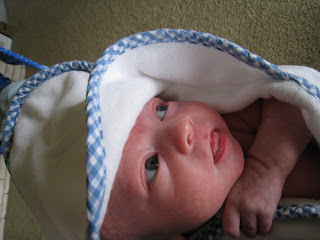 Hey all, Cullen here. I’m a month old today and boy has it been a whirlwind. I stayed up to 5 a.m this morning. It was pretty exciting. I was burping and spitting up, you know the normal activities of a one month old. My dad told me that he also has stayed up a few times to daylight, coincidentally also burping and spitting up. The most enjoyable part of my first month has been all of the quality time that I have spent with my mom. She is always talking to me and telling me how cute I am. She is dead on with the last comment, take a look at my pictures, the mold was broke when I came out. I’ve also enjoyed all the time I have spent with my Grandparents. Whenever, I see them I always get their undivided attention. My parents are always telling me how lucky I am to have such fabulous grandparents and how much they appreciate them. Anyway, gotta run, Camp is trying to have his way with another of my stuffed animals. Down boy.
Posted by Dirk and Lisa at 4/13/2008 05:01:00 PM No comments:

Cullen spent the weekend in, what his mother refers to as the homeland, Minneapolis. It was an extremely enjoyable weekend in which he was introduced to both of his Minnesota great grandmothers, relatives, and numerous new friends. He was extremely excited about the numerous gifts and compliments that he received. I was uncomfortable with the University of Minnesota onesie he received and will probably need psychological help to cope with the sight of my son sporting the maroon and gold.
Then, to add insult to injury, I come to find that Grandpa Flyer, as Mark wants to be known, has been whispering the name of Minnesota’s mascot in Cullen’s ear as he sleeps. Ugh, I now live with the mortal fear that the first word uttered from my son’s lips will be “Goldie.” Lisa on the other hand is on cloud nine.

*** We have been asked about prints of our pictures. The pictures are linked to our online album. Click on any picture and it will take you there and orders can be placed.
Posted by Dirk and Lisa at 4/06/2008 09:55:00 PM 1 comment: